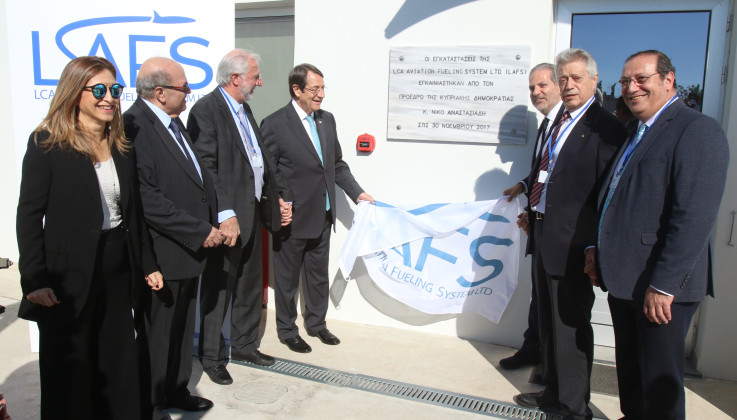 The inauguration of the impressive fuel farm of LCA Aviation Fuelling System LTD (LAFS) in Larnaka took place on Thursday the 30th of November, 2017 by the President of the Republic Mr. Nikos Anastasiades. Numerous government and state officials, economic and business leaders and associates of the company honoured the event with their presence.

LAFS was founded in 2014 and is part of the Petrolina Group of Companies. After obtaining the adequate licence from Hermes Airports Ltd, the state-of-the-art aircraft fuel terminal was designed and built based on the appropriate infrastructure that meets the strictest international aviation standards.

Mr. Dinos Lefkaritis during his speech on behalf of the LAFS Board of Directors, he highlighted that “this is one of the most important infrastructure projects that have taken place in the recent years on our island, with multiple benefits in terms of the economic, business and tourism developments of Cyprus, including the creation of new jobs. The terminal is the culmination of a long-term project and the systematic implementation of this strategic plan, which the Petrolina Group has consistently provided to Cypriot society.” In his closing remarks, Mr. Lefkaritis thanked the Ministry of Transport, Communications and Works and its officers, all government departments related to the airports, Customs, the Fire Department, the Police, Civil Aviation, the Mayor of Dromolaxia, the construction companies and consultants of the projects and Hermes Airports Ltd for the very good cooperation.

At his address to the ceremony, the President of the Republic Mr. Nikos Anastasiades quoted on “a state-of-the-art fuel terminal which today, with its impressive infrastructure meets the strictest international aviation standards while simultaneously complies with modern standards for safety, environmental protection, functionality and energy efficiency.” When referring to the Petrolina Group of Companies, he pointed out that “through continuous efforts, it consistently provides high-quality services, respecting the needs of both clients and associates, it has been acclaimed and established as one of the leading groups of companies in Cyprus.”

Dr. Anthony Kitson-Smith, Vice-president of the Energy Institute Aviation Committee, during his address, praised the professionalism and consistency of the company, while characterising the terminal as a “jewel” for Cyprus and the Larnaka Airport which will contribute to the country’s future economic development.

Finally, Mr. Panayiotis Hadjipantelis, Chairman of the Board of Directors of Hermes Airports Ltd, highlighted in his speech that the new aviation fuel terminal “is an essential boom in the operation of the Larnaka Airport, which will allow us to further strengthen its core position in the wider Eastern Mediterranean region.

LAFS has set the standard for high-quality, cost-effective and customer-oriented services, meets the needs of airline fuel vendors and airline companies licensed by the Civil Aviation Authority (CAA) and is compliant with the JIG international standards. LAFS installations are certified by OHSAS 18001 2005, EN ISO 9001: 2015 (Quality System) and EN ISO 14001: 2015 (Environmental Management System).

The services which LAFS provides include, among others, receiving aviation fuel from licensed fuel vendors, storage of aviation fuel in tanks and the distribution of fuel to vehicles located within the airport. An additional important service offered is the performance of product quality control and the guarantee that the received and stored fuels meet the requirements of the international JET A-1 standards, as well as the maintenance and conservation of the equipment in the fuel farm according to the International Air Transport Association (IATA) and the International Civil Aviation Organization (ICAO), the Joint Inspection Group (JIG) and other relevant international standards. 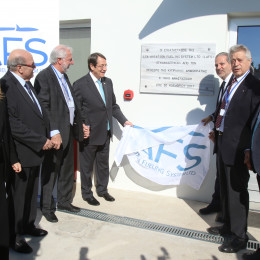